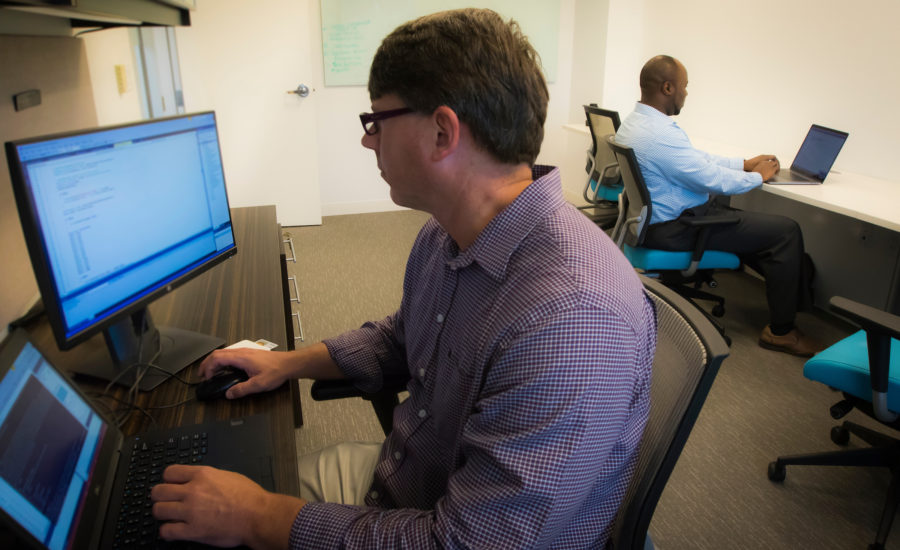 Our teams and spectators enjoyed our first Hack-a-Thon of 2018, that we held on Friday February 23 in our Reston office. Three teams of 5–composed of three developers, one scrum master, and one product owner–had just 6 hours to make improvements to an existing microservice-based application developed by our Center of Innovation (COI). Each team established their own agile development process for the day and selected tools to support their projects. The three teams were given a pre-defined list of user stories with different point values in an effort to score the most points which ranged from enhancing the user-interface to fixing security vulnerabilities in the application and infrastructure. They were also able to add their own stories and correct defects within the application that they came across during development.

Dev Technology’s COI also developed a Jenkins CI/CD pipeline in AWS for each team to use to build, test, and deploy their code. Each team used a fork of the existing application’s code in GitHub to start with which was developed using Node.js, Angular 5, and BootstrapUI. Each teams’ application was containerized, using Docker, and deployed using AWS Fargate to the production environment where their user stories could be demoed to the product owners and judges.

Our judges watched the teams at work as well as each team’s final presentations, which we streamed live on Facebook and can now be found on our YouTube channel. Teams were judged on how well they worked together, their agile processes, and their final presentation. The judges also took into consideration the work that each team completed in the allotted timeframe and the number of points earned by delivering certain user stories.

Team 1, which chose the name Ctrl-Alt-Gelites, was our winner for Dev Technology Hack-a-Thon #1. Team members included James Caple, Troy Welck, Matt Anderson, Christine Schelble, and Kamal Dhiman. The judges selected Ctrl-Alt-Gelites based on the strength of their collaboration to solve problems and their compelling presentation which really provided a great deal of insight into how the team chose and refined their agile process during the course of the hack-a-thon. The members of Team 1 each earned a pair of tickets to the concert of their choice at the Capital One Arena in a private suite.